Lundin pro shop is one of Scotland's premier golf outlets. Based at the stunning Lundin Golf Club in the East Neuk of Fife only 10 miles from St Andrews. The facility is the only place to go if you want help from true professionals. PGA staff are on hand to help improve your game, tailor a tuition package or even help hit your first golf ball but can also, on visiting the pro shop advise on club fitting and supply everything the discerning golfer could need from balls, tees and gloves to clubs, bags and clothing in our 1200 square foot purpose built pro shop. 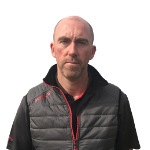 Ron Walker - Head PGA Professional
Starting off in the golf business back in 1988 with Jim Farmer at St Andrews, it enabled me to learn from a master at a young age! After spending almost two years in the “Auld Grey Toon” as it’s called, the decision was made to take the magic step and turn professional.

Moving then to the private members golf club in Elie in 1990 was where the ambition and interest really took hold. The professional at that time (Robin Wilson) was Scotland’s first Foremost golf professional which allowed me to see how things would change as the group grew larger and stronger, which was why when the time came for me there was only one choice of the group I should join!

In 1998 I moved to St Andrews once again to work for The Old Course Hotel taking up the position of teaching professional where I was responsible for all tuition for the resort, this position was held until 2001 until I was promoted to the role of Head Professional at The Duke’s, St Andrews where I took overall control of all aspects of the golf operation at the facility.

2009 saw the lifetime ambition achieved!! The move to Lundin Golf Club happened! As a young assistant it was always a place I enjoyed playing and always hoped but never envisaged that the dream would ever materialise. With our new shop being opened in 2010 the rest is history!

Out of the following golfers, who is most likely to dominate golf over the next decade?

Here are the current poll results

Don't miss updates from us.

Thank you for signing up.

One last step - You will receive an email from us in the next few minutes. Please click the link to confirm you are happy to receive our weekly newsletter.